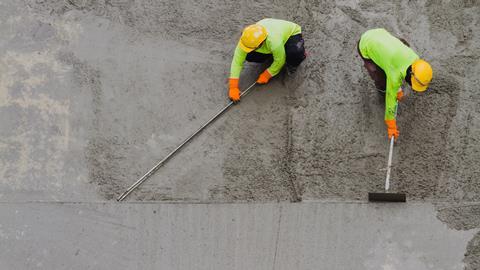 We see concrete everywhere in our day-to-day including sidewalks, driveways, walls, and nearly every man-made structure new or renovated. To answer some common questions people may have when it comes to usage, proper management, and other considerations with concrete, we have compiled the knowledge and insight from our experts at Bilt: Jeff Gould (President), Travis Murphy (Construction Manager), and Muhammad Ali Hassan (Junior Project Manager).

Concrete is made up for four main ingredients: Sand (Fine Aggregate), Gravel (Coarse Aggregate), Cement, and Water. They are bonded together with a fluid cement (cement paste) that hardens (cures) over time. It is used as a foundational base for nearly all construction structures due to its high stability and bonding ability.

“Rain, snow, and other weather patterns primarily affect the pouring and curing process. For instance, during pouring, typically between +7 and 12 degrees Celsius provides the ideal temperature for a smooth pour. If it becomes too cold, say -30 degrees Celsius, the concrete can get compromised and cracked.” – Jeff Gould, President

During the curing process, concrete produces a lot of heat. When the temperature is too high, this can slow down the process. Similarly, if the temperature is too high, then the curing process is also slower and moisture from the concrete will freeze rather than harden. When combined with the heat generated from curing, it can cause a “shock” like placing a cold glass in a hot oven.

In hotter parts of the world, you can expect to see workers spraying hot water on concrete as it cures. This process is known as “hydration” to induce evaporation and generate heat. Hot water spraying continuously allows the curing process to slow down and stretch it to the ideal 28 days it takes to sufficiently harden. Keeping a careful watch on the weather during a project timeline is crucial for the pouring and curing phase, but weather itself after concrete has cured typically is not affected.

The Truth About Cracks

Cracks are an inevitability when it comes to concrete work. After all, the constant pressure and accumulated years of weight will eventually satisfy general laws of physics. But not all cracks require the same amount of attention.

Spider cracks, for instance, usually should not be a cause for concern. They are quite common as the first signs of wear and seen nearly everywhere. They are generally more cosmetic than structurally compromised. When the crack becomes larger (wider), then an investigation would be warranted. If a crack becomes the width of a dime (approximately 1 centimeter), then that would be a cause for concern. For renovation projects, these are common places to be addressed. If some cracks become larger issues, then demolition may be an option.

Similar to a hot air balloon, heat causes concrete to expand. The force from the expansion will deliver a force in all directions to push anything in its way (for example, a brick all or adjacent slab).

“Expansion joints are used as a point of separation (or isolation), between other static surfaces. Typically made of a compressible material like asphalt, rubber, or lumber, expansion joints must act as shock absorbers to relieve the stress that expansion puts on concrete and prevent cracking.” – Muhammad Ali Hassan, Junior Project Manager

If cracks are appearing immediately after pouring or right after curing, it may show signs that it was not done properly; otherwise, cracks are completely normal.

How Long Does It Take For Concrete To Set?

Concrete should ideally take 28 days to properly set by normal standards. Since there is heat generated from the curing process, the temperature where concrete is setting needs to have the right balance with the temperature of the environment to maintain a proper curing pace. Crystals are formed during concrete that helps strengthen concrete. Curing too quickly and fewer crystals are formed. That is why 28 days is the most ideal time as it allows for these crystals to form. For renovation projects, it is imperative that the concrete is perfect for many years to come.

As we already understand, temperature and weather elements for outdoor concrete requires more consideration. In winter, a specific type of mix is required to properly cure in harsh, colder temperatures.

In contrast, indoor concrete work differs due to its controlled environment. In these controlled settings, creating a strong slab of concrete can occur much easier. For example, let us explore the precast steps for exterior concrete steps for houses. These are manufactured in controlled indoor environments to strengthen. When they arrive on site for installation, they are already incredibly strong and very unlikely to see cracks during precast steps.

Ultimately, the more controlled and protected the process, the better the quality of the concrete. For exterior pours while the concrete is curing, concrete should be protected and insulated even if it means covering it with a tarp. Fortunately, working around harsh weather conditions such as extreme cold, does not mean that concrete pouring is impossible. Other procedures to consider such as ratio mix and added mixtures to the concrete can balance out the rigors caused by colder temperatures.

The Right Amount of Rebar

“I have seen guys out there lying down too little rebar and the concrete just doesn’t have the adequate strength. But the I’ve also seen guys out there who lay down too much rebar. This is also a problem because we need to have some flex as well; the earth below our feet is always moving and shifting so too much rebar can cause the concrete to be too stiff.” – Travis Murphy, Construction Manager

As we have already mentioned the issues caused by inappropriate temperatures, another consideration to avoid structural issues is choosing the right amount of rebar. With tensile strength in concrete we know how brittle it is and that just a slab of concrete laying flat on a surface could easily break. When combined with steel rebar, this provides the compressive strength required for a pad to be walked on. Too little rebar would not provide adequate strength and become susceptible to collapse. Conversely, too much rebar can cause issues as a bit of flexibility is required to account for the constant shifts and movements from earth. When concrete is too stiff from excessive rebar and combined with natural forces from earth, it will snap and crack under pressure.

“An interesting fact: if you ever head East to Toronto and you find a viewing spot of the CN tower from a good distance you can try and line your eyes to the C Tower and a pole—or even line your pointer fingers vertical in front of your eyes against the CN Tower. On a windy day you can actually see that the CN tower will sway left and right. In fact, the tower can actually move six feet on either of its sides; again, this was constructed purposely for flex and that it won’t snap against too much pressure.” – Travis Murphy, Construction Manager 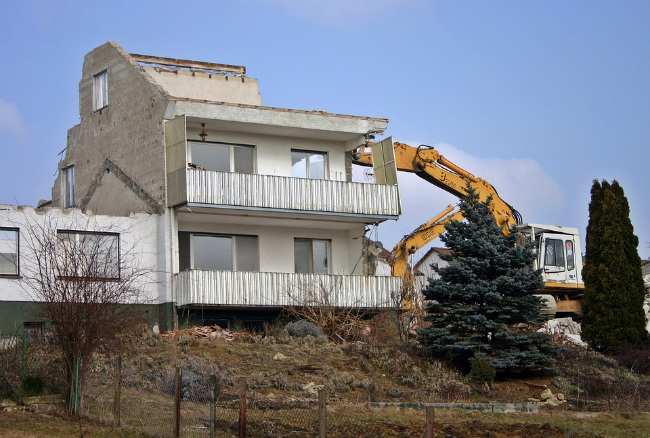 Demolition is the easiest and quickest phase of a construction process; and depending on why you are demolishing, there are certain things that you need to consider before starting the demolition process.

Consider the Method of Demolition

There are various methods that you can apply to your process; these depend primarily on your end-goal, and the time-frame available to you. Here are the three most common demolition methods:

This method is the most common method of demolition that employs hydraulic excavators and other heavy machinery to carry out the task in a short time, while minimizing the scope for reuse and refurbishment of old material.

This method is recognized by its manual process that requires considerable time, but the result is that you can reuse a lot of the materials salvaged from the old structure. This can also be considered as a branch of lean construction.

This highly recommended method combines the two methods, ensuring a quick time span for completion as well as a proper scope for the reuse of old materials.

Hire a Professional for the Job

Demolition is an intricate process that requires you to follow specific laws and safety standards, and it also requires specialized equipment. For the same, we recommended that you hire a professional contractor for your demolition project in Edmonton.

Adhere to the Safety Laws and Obtain the Required Permits

For every demolition project, you are required to follow specific rules and regulations that depend on the type of demolition you are planning to do. You also need various permits like OSCAM and TCP. Make sure you have obtained these permits to avoid any hassle during the demolition.

Refer to this guideline for your demolition project in Edmonton.

We at Bilt, keep our demolition sites as clean as possible with limited interruption to neighbours. There are however, City Bylaws to follow to ensure everyone is aware of the demolition work.

Edmonton has particular bylaws that you need to follow regarding noise control, follow them to avoid any hassle with the law.

Demolition, when safety standards are not met, can be a substantial risk. Safety must always be at the forefront of any demolition project. The SCC Code of Practice for Safety in Demolition of Structures outlines general requirements to meet safety standards. Fire is another primary concern when it comes to safety. The Fire Safety Plan set forth by the Municipal Affairs of Alberta also refers to important points to consider as well.

Lastly, other minor precautions to consider include taking care of the environment around the demolition site (trees, animals, etc.), disconnecting all the services (electricity, sewage, gas, etc.), and setting a contingency plan in case the cost goes beyond your expected budget. Contact us to know more about the bylaws, permits, methods and solutions for your demolition project in Edmonton.